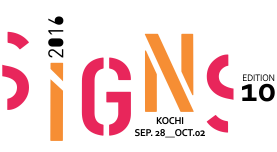 Rakesh Sharma, the documentary film-maker, based in Mumbai is the Jury chairman for the 10th edition of Signs short film and documentary festival. Awards will be given to the category of Short Feature, Documentaries, Cinema of Resistance, and Cinema Experimenta.

Documentary and Short Film awards and prizes will be given to the winners in each categories. The prizes are Best Documentary: Rs 50,000 , Best Short Feature: Rs 50,000, Cinema of Resistance: Rs 25,000, Cinema Experimenta: Rs 25,000 etc.