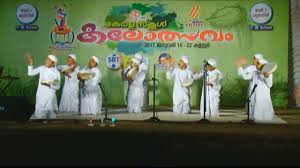 57th Kerala State School Kalolsavam 2017 will be started at Kannur from January 16 to 22, 2017 at 19 venues in Kannur district. About more than 10, 000 contestants are performed to prove their talents in various categories like Art, Music, Dance, Drama etc.

Kerala state school kalolsavam 2017 will be conducted at various venues in Kannur district. The School Kalolsavam scheduled to be conducted on January